But as it was, when I asked Elsie which book character she’d like to dress up as for the Book Week Parade this week, she nearly burst with excitement when she thought of Where’s Wally. That made two of us. She could barely sleep counting down the days. I, on the other hand, slept soundly and didn’t have to stay up late to do a thing.

She found a red and white striped top in her drawer and decided that her school uniform pants were the perfect colour. That just left a beanie and walking stick. I went into town and searched every store for a striped red and white beanie, even if it said Swans all the way around it. Nothing.

But. Even better, I found a plain red beanie in an op shop and a plain white one that a little old lady had knitted and was selling in the shoe shop, and I stitched one on top of the other. And I nearly made the pom-pom, just so I could get in the spirit of creating a costume, but it just so happens there was a big red one sitting in the craft tub.

I found a metal walking stick in another shop. Anthony sawed it off and put the rubber stopper back on the bottom to make it the perfect hip-height for Elsie.

Then I popped my glasses on her face and she was ready.

I think I’ll ask her again each year if she’d like to be Wally.

It’s funny cos she has the same smile.

On the weekend the girls wanted to dress as black cats and put on a concert. The first concert they’d planned behind closed doors for their audience of Anthony and I. It was a silent picture. I cried.

And they found ice in the puddles for the first time on the way to the bus stop. That was cool. 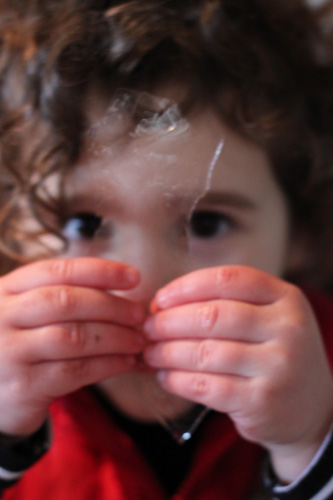 Now that I’ve got my head around the small moments thing, they just keep happening and I just keep loving them. 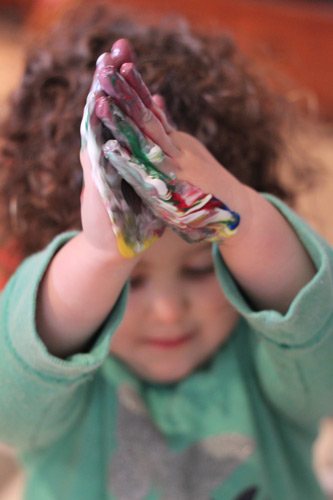