Imagine there’s a cupcake shop on the corner of your street and they’re calling for cupcakes. If you bake cupcakes all year, you can bring them in at the end of the year for the shop to sell. As many as you like. You’ll get paid for what you bring in.

You make some decisions about the types of cupcakes you’ll make and you set to work day after day baking them.

One day, there are no eggs at your local store because everybody is buying eggs. Another day, you are a little late starting and you don’t cook them for long enough. Your dog eats quite a few one day. And there’s that day when the power goes out and ruins the cupcakes in your oven.

At the end of the year, you take all of the batches of cupcakes out of the freezer and deliver them to the cupcake shop.

Everyone in the neighbourhood has arrived with their trays. The shop owner tests each tray and grades the cupcakes. She pays you according to grade. She doesn’t pay you as much for the ones that missed out on the eggs. Or those that were underdone. Those that were damaged with dog bites don’t make as much. Nor do the ones that were ruined when the power went out.

And because there are cupcakes everywhere, the shop owner doesn’t pay you much, in fact, for any of your cupcakes, even your best ones. 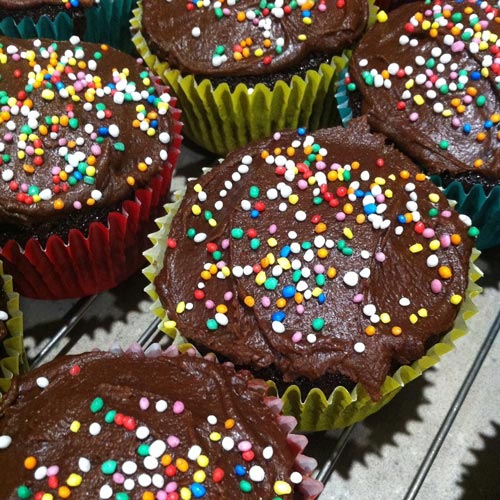 Our grain harvest is done for another year. 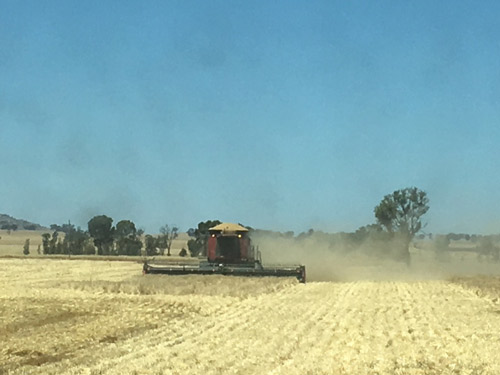 Like those baking cupcakes, we made decisions throughout the year. What to sow, when to sow. We sourced inputs and dealt with pests or diseases. We relied on, not electricity for our ovens, but the weather. We got rain at the right times, the right amount of rain even.

And we got frosts at the wrong times too.

So some of the beautiful-looking thick, tall wheat crops had light, shrivelled frosted grains.

We started harvest at the end of November. We stopped for Christmas Day or rain delays or machinery breakdowns or total fire ban days, and we finished a couple of days ago.

We’ve been lining up at the cupcake shop with the ones we wanted to sell and accepted the price that the shop owner offered. Some we stored in our freezer in the hope that she’ll pay us more when there are less cakes around.

For the first time, we made silo bags for grain storage this year. Here’s a time-lapse video of the chaser-bin emptying wheat into the bagger to fill the bag.

I was the chaser-bin driver this year. In recent years when crops haven’t yielded well, we haven’t needed to use a chaser-bin. But this year when the crops were better, it was a great time saver, chasing the header around the paddock, allowing the header to empty without stopping.

The chaser-bin is a trailer towed by a tractor. When the header is full of grain, the chaser-bin driver puts down their notebook or novel, or gets off Facebook on their phone, and drives over to where the header is harvesting. They drive alongside, about a metre apart and at the same speed, so that the auger from the header can stick out and empty the grain into the trailer. 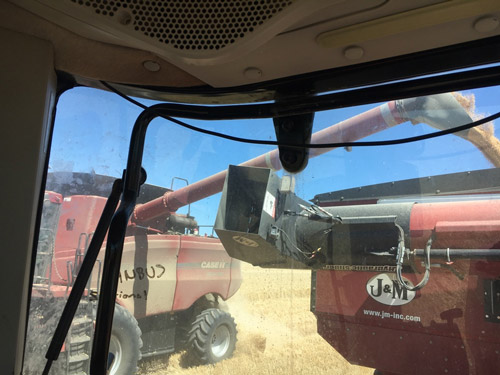 Once that’s done, the chaser-bin goes and parks beside the truck, field bin or silo bag to empty the grain.

If you had two headers in the same paddock, the chaser-bin driver wouldn’t even have time to unwrap the Gladwrap on their salad roll.

But we have one header and so each day I’d set off with everybody’s lunches and my fabric bag full of goodies; lip balm, eye drops, notebook, several pens, the novel I’m reading (Jodi Picoult’s Small Great Things). DBC Pierre’s Release the bats (a book about writing fiction – it’s awesome – get it) and Writing Fiction by the Gotham Writers’ Workshop (t’s just as good – get it, also).

There were never more than five minutes at a time in between unloading and loading (when full concentration is required), putting a new bag on the bagger, opening or closing lids on field bins, shifting paddocks, filling up with fuel or trying to tune into a station on the radio that was not broadcasting the cricket.

So I didn’t get much written or read; mostly I spent the time posting things like this to Instagram:

Or trying to capture an amazing sunset with the camera on my phone:

I loved harvest. It’s the culmination of the whole year’s work. It’s busy and rewarding. You made the cupcakes because you like baking cupcakes. Some of the things were in your control, some were not. You did your best based on that, and that means you can celebrate when a good batch comes out of the oven. 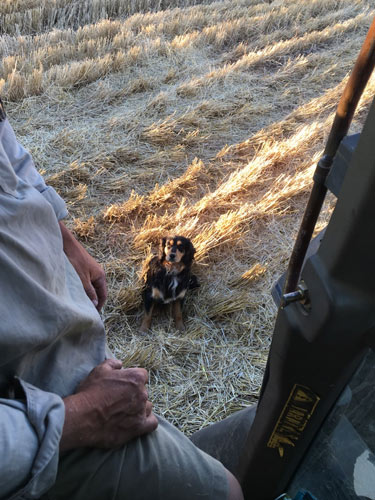 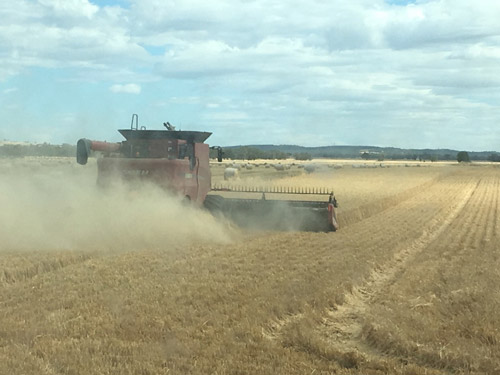 We finished a couple of days ago and now I’m back in the house and the kitchen floor is littered with four-litre drinkers and esky bags from lunches and the bench is cluttered with plastic containers and chopping boards and a month’s worth of mail and newspapers,

I feel my anxiety levels rise. I want to be back on the chaser-bin because working during harvest feels more important than clearing household surfaces.

We have less than a week of the school holidays left. I’m going to shift the basket of washing along on the lounge room floor and play Yahtzee with the kids.

2 thoughts on “Harvest is finished at last”